In 2015, Saholy and her husband were looking forward to the joyful birth of her first child.

Like 60% of women in Madagascar, Saholy planned to deliver her baby at home in the rural countryside.  When she started showing signs of obstructed labour, she knew it was already too late to seek help.  Saholy’s village was so remote that it could only be reached by foot.  It would have taken her 4 days to walk to the nearest town to see a doctor.  Had she been able to walk the journey, she would still face another 2 days bus ride to the nearest hospital that could perform a c- section.

After two agonising days of labour pains, Saholy delivered a stillborn baby in her home.  She expected a normal birth and healthy baby, but instead she was left with constant urine leaking and difficulty walking.

After a few months of leaking, it was clear the problem wasn’t getting better, and Saholy’s husband abandoned her.  She tried to continue her work as a seller in the market, but the strong smell of urine made it difficult to attract customers and eventually she began avoiding public places.

In early 2016, Saholy reached out for help and found a surgeon who could do her VVF repair. Unfortunately, that surgery failed and she went home still leaking urine.

“I did not lose hope, because I heard that Freedom from Fistula was coming to Madagascar soon and could help me.  The wait seemed long but I believed you would come.”

In October, the new fistula centre opened and Saholy was the first patient. Having had a surgery before, she was an encouragement to the other patients, providing helpful words of comfort.  As the weeks passed by, Saholy recovered well.

With excellent medical care her leg numbness showed improvement, and she remained dry.  Not only did she heal physically, but Saholy began to change emotionally too.  She is excited for her future and plans to move in with her siblings and launch a small business selling groceries in their village.

We are looking forward to following up with Saholy to see what she will accomplish in her new life, finally free from fistula. 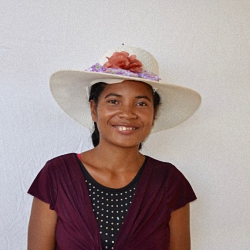