Susan is 17 years old from Moyamaba District in the south of Sierra Leone.  She lost both parents at a young age, losing her mother at just six months old.

Susan was adopted and her name changed from Juliana to Susan.  Her new parents relocated with her to another district in the northern part of Sierra Leone (Kabala) and stayed together for 12 years. Her new parents took very good care of her, sent her to school and provided for all of her needs.

Susan told us 'that faithful day I was in school when one of our neighbors went to call me that I was needed at home, I left school and I went with her. I met lot of people crying, I asked why and they said my dad is dead. I started crying because I was sad but because I also knew that was the end of the road for me. After the burial my adopted mum took me back to my village and handed me over to my uncle since she would not be able to provide for me or send me to school. My uncle took me to Freetown to stay with my cousin’.

Susan stayed with her cousin for two years. They had a misunderstanding and her cousin asked her to leave. She had nowhere to go, she begged and called community elders to plead on her behalf.  Even though Susan knew she had done nothing wrong she continued to plead, but her cousin refused to accept her.  Susan left and ended up staying in an unfinished apartment with a man who got her pregnant. She was ill treated and abused.

Susan was booked by our antenatal team during their community outreach in May 2020. Her baby is now just over a year old.  While in our care at the Aberdeen Women's Centre Susan was invited to take part in our Dream Girls class where she received psychosocial counselling.

She is now part of the hostel girls initiative and is focusing her training on tailoring. One day she wants to become a tailor.

I thank Aberdeen Women Centre for their support to me, I thank everyone who has shared my pain at this time and tried to raise my mood, including the teachers and the counsellor. I say thank you very much for everything. 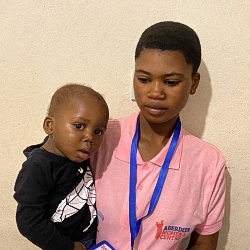