Wetu developed an obstetric fistula after the birth of her first child. In labour for a day, the baby was too big for her to deliver and by the time the hospital operated, it was too late and sadly her baby died.

In May 2017 Wetu came to the Fistula Care Centre for treatment and since her operation is dry and doing well.

Before treatment Wetu was stigmasied and ostracised from her community, only receiving love and support from her husband and family, who encouraged her and gave her hope.

During her time at the Centre Wetu attended arts, crafts and literacy classes which she said helped her enormously. She is now able to sew her own clothes and can also now write her name which she wasn't able to do before. Since leaving the Centre she has raised awareness of fistula in her community at community gatherings and told of her own experiences.

Wetu received a solar Charging Station when she left the Centre and has said that it has changed her life. She makes money from charging phones for her community, reinvesting in her business and can contribute to the household economy.

Wetu gives thanks to Freedom from Fistula and says we have made her life better. She is now an independent woman 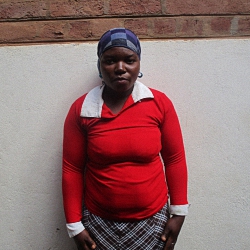