Stelia was married at the age of 23 and has lived with fistula for 14 years. It was during her first pregnancy with her first husband that she developed fistula. When Stelia went into labour she had to wait for 24 hours before she found transport to go to the hospital, but it was already too late, and they lost the baby. When Stelia woke up from her operation the next day she noticed that she was leaking urine.

Over the years Stelia visited many hospitals but they did not know how to treat her condition. Stelia’s husband left her, she then remarried her second husband who unfortunately also left her as he could not live with her condition. She then remarried again to her third husband and became step mother to his 5 children. Stelia adapted to her new life and she accepted the fact that this was how she was going to live for the rest of her life.

In 2016 the centre was conducting a fistula awareness campaign in her home district, where her brother heard about the centre and called her to the campaign. She was examined and brought back to the centre where she was operated on and became fistula free.

After being cured Stelia was happy to be able to doing the things she used to do before she had fistula, such as interacting with the members of her community, her friends that she missed dearly and attend church and community gatherings again.

During her stay at the centre Stelia attended the educational classes. She especially liked the business classes and gained new business skills and knowledge, which she has used to start planting and growing vegetables that she sells to the locals. So far she has made Mk 45,000 and has used the money to pay school fees and for school materials for her children and also feed her family.

In 2017 Stelia received a solar charging station from us.  Her family were excited to have lights and to set up a phone charging busines to further help lift them out of poverty.

In 2019 Stelia was selected to be one of our former patients to make reusable sanitary pads in her home district, as there is a need for them. She received a manual sewing machine and some start up materials. So far Stelia has made MK 76, 500 from making clothes for both women and men. She has found it challenging to sell the pads as most women and girls in her village are unaware and do not understand the importance of the product. Though there are schools far from her home she is still planning to visit some  to try sell the pads and raise awareness.

Stelia’s mother in law is a seamstress and she has been teaching her how to sew and cut cloth. Stelia has used some of the money raised through her seamstress business to purchase cement that she has used to finish the floor to her house. She has also been supporting her 5 step kids who are in school. Stelia has money saved up which she plans to use to come to the city to purchase cheaper materials to make clothes.

Economic empowerment opportunities through Freedom From Fistula, and her hard work, have made Stelia a very happy woman as she is now able to support her family and is now the main bread winner.

After she was discharged Stelia felt the need to help other woman that faced the same problem she had. She started talking at community gatherings and sharing her experience as a fistula patient and encourage the people who have this problem to come seek treatment at the Fistula Care Centre. Stelia was trained in 2019 as a patient ambassador and received all her training materials to use to raise awareness about fistula in her community. So far Elizabeth has brought 2 women, both of whom have been cured.

“I am grateful for everything the FCC has done for me. I am at peace and living my best life, you have changed my life. You have transformed me into a new woman. I will forever be grateful.” 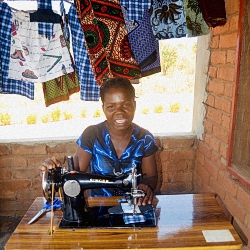