Rebecca suffered with fistula for 4 years, lost her child, her husband and was ostracised from her friends and family.

Rebecca suffered with fistula for 4 years.  Throughout this time Rebecca was isolated by her friends and mistreated by her husband, who chased her out of the house. She had to stay at a neighbour's home because her family lived far away and she did not have enough money for transport. While still living next to her husband he began to cheat on her and married another woman, this was a very hurtful, embarrassing and painful time for Rebecca as she was still in the community and was ashamed of how her husband had treated her.

When she finally did manage to return home to her family, her mother could not stand the smell from Rebecca’s condition and there were great tensions between her and her mother.

All these problems started when Rebecca developed the problem of fistula. When Rebecca went into labour on her second pregnancy she went to the traditional birth attendant and stayed there for two days where she was not given any help. Throughout this time she was passing out blood continuously and so after two days she was taken to the hospital in the nearest town of Dedza. Here she was taken straight to theatre where they performed surgery. Sadly, the child died during the long and difficult labour and so Rebecca was left to heal after the surgery.

A week after the operation, Rebecca discovered that she was leaking urine and the doctors told her that this would go away but it did not.

Rebecca heard about the fistula care centre on the radio and saved up money to travel from Dedza to Lilongwe to receive treatment. She was treated in March 2015 but was in recovery for an extended period due to difficulties and so she was here until June to heal completely before returning home. Throughout this time spent at the centre, Rebecca benefitted a lot from the classes and she is now able to read basic sentences and write her name. In the arts and crafts classes she learned a lot of skills which have helped her. She learned to sew bags and make jewellery and since returning home has made bags for herself and her mother.

Since returning to her community and family all of her relationships are now far better than before. She did not return to her husband as he took another three wives but her family have supported her and she is now able to live with them peacefully. Her friends no longer isolate her and she has a good relationship with the people in her community. Since healing from fistula, Rebecca lives a happy life.

Rebecca received a Bboxx when leaving the centre and it has really changed her life. She now lives in a house full of light and she is so happy to have an income generating activity so that she can obtain money and help to care for her family. So far, Rebecca has made MK 15,000.

She has used the money earned from the Bboxx business of charging phones to open a small grocery store where she sells items, alongside these two business she also makes and sells donuts. Another of the skills learned at the centre! If her successes in business continue and she makes enough money, she hopes to build her own house this year. She already has people making bricks for her to use and by the end of the year she hopes that a place of her own will be ready for her to live in.

On top of these businesses, Rebecca is one of our most active patient ambassadors. She has brought 12 patients to the centre since leaving in June last year. She brings at least 1 patient a month and enjoys raising awareness of fistula in her community and those surrounding her. 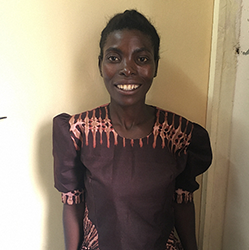