Julita’s fistula was caused in her 7th pregnancy and she suffered with fistula for 19 years.

When she went into labour she delayed going to the hospital and when she did finally arrive at the hospital she was delayed further from 10pm at night to when the doctors decided to operate on her at 9am the next morning. After the operation, Julita saw that she was passing urine continuously and as time went on it became worse.

Her life living with fistula was not easy, she was constantly uncomfortable and even though she had her own business her life was not good as she was unhappy. Everything became difficult for her and she couldn’t enjoy herself.

She was told of the Fistula Care Centre by a patient ambassador and received treatment in February 2016. While at the centre, Julita attended the arts and crafts classes and benefitted greatly as she now knows how to make jewellery and door mats.

Since returning home, Julita’s relationship with her family and friends has been fine. Her husband stayed by her side throughout her time with fistula and has always been there for her, this is something that she really appreciated and that helped her to live for so long.

Now that she is in recovery, Julita’s goal is to return to her business. She has a child that had to drop out of school because they didn’t have enough money and Julita had to give up her business. Her son did well in previous exams and she wants him to return to his education as soon as possible, so the sooner she can start her business the sooner he can return to school.

Julita has so far brought one patient to the centre and is sensitising the community as often as she can. Julita has set up a small business with the Bboxx she received when leaving the centre. She is so grateful for the opportunity of the Bboxx and so far has made MK 4500. This money has allowed her to buy maize and household items. She is so happy to be living in a house with light and the money that she gets from charging phones has been so helpful in her time of recovery.

Julita is 47, married with 2 children and lives in the Dowa district of Kamphangale village, Malawi 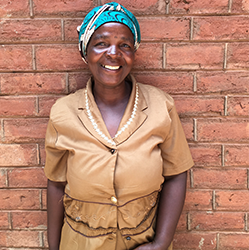