Faliyeti lived with fistula for 14 years after her 7th pregnancy.

Faliyeti followed all good procedures when she went into labour, she went to the hospital in good time but was delayed by the doctors. Time passed and due to prolonged labour, thanks to malpractice, they had to do an operation on her to get the baby out. Unfortunately, the child did not make it and once they had operated and she was in recovery, she noticed that she was passing out urine continuously.

For 14 years, Faliyeti did not know how to get rid of this continuous leaking, until she heard about the Fistula Care Centre on the radio. She received treatment in September 2015.

Faliyeti was one of the lucky ones, she was not isolated from her community or family and the only challenge she faced was the difficulty with having a fistula. This means that relationships with her relatives and friends are all in good order, however, her husband had some difficulties waiting for 6 months while Faliyeti was in recovery. He found it difficult to wait and not sleep with her in that time, but happily he lasted the six months and now Faliyeti is out of her recovery period.

Throughout her time at the centre, Faliyeti was not able to attend classes - her problem was very big and so she had to go straight to theatre when she arrived at the centre. However, even though she could not attend classes she managed to sew a blanket from the knitted squares due to the simplicity of the skill learned.

Since returning to her community, Faliyeti has been able to spread awareness of fistula by talking at community gatherings. She has already found one person with fistula in such a short time and she will bring this patient after the harvesting season. Faliyeti hopes to continue the good work she is doing and when she can travel further she will go to other communities as well as her own.

When leaving the centre, Faliyeti received a Bboxx which she says has changed her life. She can now sleep in a house that is full of light and the money from charging phones allows to her to help maintain her family life by buying household items and food. So far, Faliyeti has made MK 400 but it is difficult for her to make money as around 7 people in her village have solar charging points. She is still incredibly grateful for the Bboxx and so glad that she gets the opportunity to better life for both her and her family. If she can make enough money in the future, Faliyeti wants to build her own home.

Faliyeti is 41, married with 6 children and lives in the Ntcheu district of Jowero village, Malawi 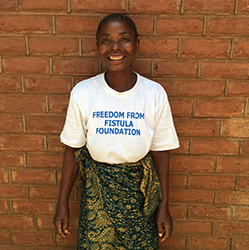